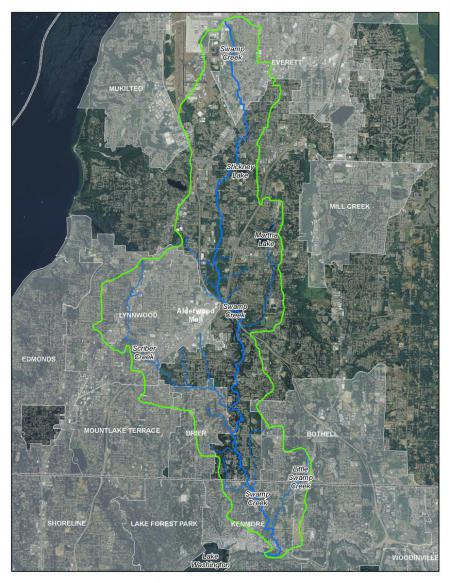 Swamp Creek has been extensively studied over the past few decades to better understand its complex ecology. Beginning as early as 1972, King County has been collecting monthly water quality samples. A long-term (1979-2007) monitoring study yielded many useful results. The study found that there were:

In the late 1980's and 1990's there was a massive effort to improve stream monitoring in the interest of expanding the knowledge of watershed ecology and conserving natural resources. A Stream Sediment Monitoring Program was established in 1987 to look for heavy metals, chemicals, and PCB's in sediment and sediment-dwelling animals. The program found presence of nickel, arescenic, plastics, PCB's, and pesticides at several sites in Swamp Creek exceeding the Sediment Cleanup Objectives (SCO) standards. In 1997, the Salmon Water Program began recording salmon sightings throughout the county and consistently find Coho salmon in Swamp Creek. Subsequently, in 1999, King County also created a Habitat Assessment Study to classify stretches of streambank habitat from low to high. Most of the stretches in Swamp Creek were classified as low and medium-low largely due to urbanization. Increased urbanization has resulted in peak flows of greater intensity and duration, lower summer flows, increased flashiness, over-widening of the stream channel, bank erosion, and scour of the streambed (Kerwin, 2002). In recent years, a Benthic Invertebrate program was established to help estimate overall stream health. Varying concentrations of certain invertebrate species that live in the streambed at a given point in time (ecological community) are generally good indicators of biological stream health.

The City of Kenmore has implemented many programs over the last 20 years to assess Swamp Creek's health. Because it is such a large basin, it picks up a lot of pollutants as it travels the 11 miles south into Kenmore, Sammamish River, and Lake Washington. Kenmore is ultimately responsible for the water leaving it's boundaries, regardless where the pollutants were truly picked up. Kenmore benefits greatly from county-wide and inter-county efforts to monitor the waters, but the City has also implemented its own programs.

Under the NPDES Permit, Swamp Creek was identified to have historically elevated fecal coliform levels and now requires a TMDL. The TMDL is designed to monitor levels of bacteria in the water each month until it is no longer deemed necessary.

In addition to the required testing, the City recently implemented a high-tech long-term monitoring station at close to where Swamp Creek meets Sammamish River. More about the stream monitoring program can be found on the Stream Monitoring page and on the live feed of the data. 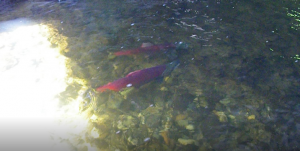