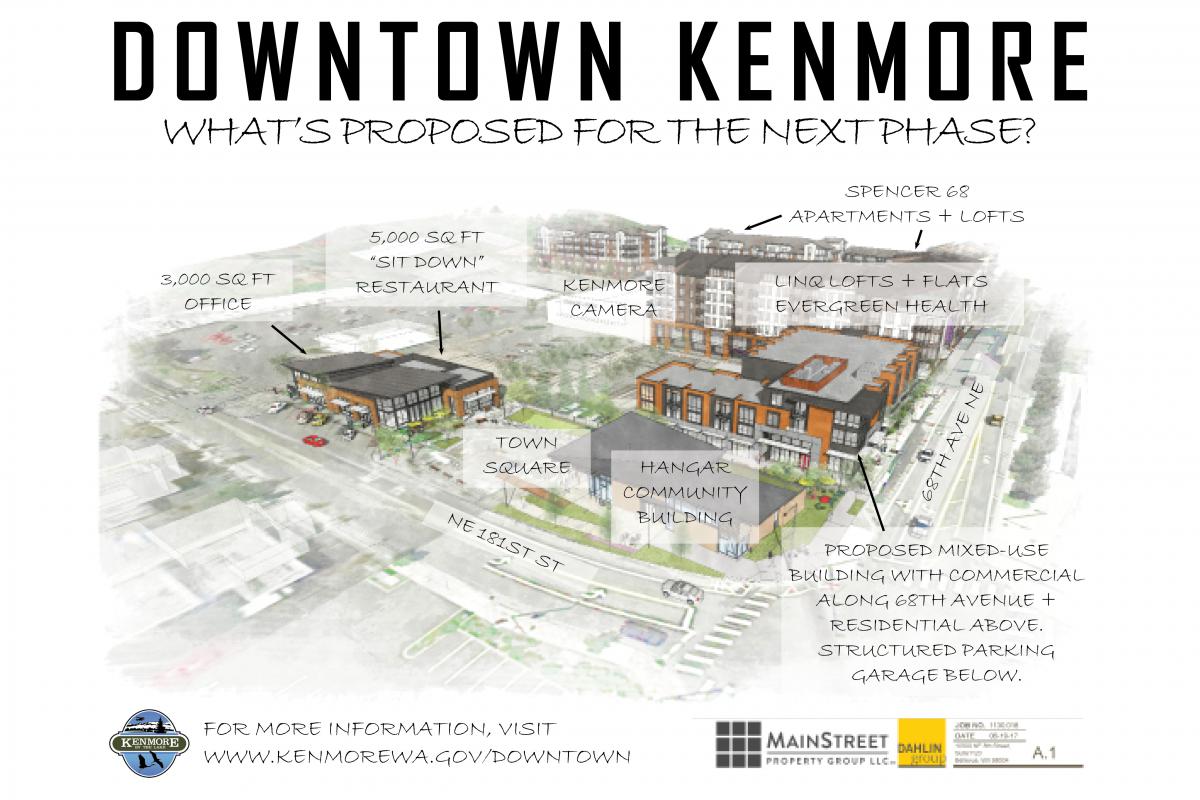 The City is making progress in implementing the community's vision of downtown Kenmore as a walkable place with a public square where Kenmore-area residents and workers can meet their daily needs and see one another face-to-face.

To stay informed on the Downtown Kenmore project, you can sign up to the City's email distribution list. Project updates will be posted on this web page.

Kenmore’s downtown redevelopment is well underway, with new private sector investment in what was formerly known as downtown Kenmore approaching $100 million since 2014. The LINQ building is complete, with Evergreen Health clinic, including 7-days-a-week urgent care, and Minahan Dental. The Kenmore Town Square is complete, and the new Hangar community building with coffee franchise Diva Espresso is now open. Reserve a space in the Hangar's Beaver Room or Otter Room by visiting www.kenmorehangar.com!

MainStreet Property Group constructed a new “sit-down” restaurant, the Seaplane Kitchen + Bar, and a physical therapy clinic on the parcel adjacent to and at the west end of the Kenmore Town Square.

What is Downtown Kenmore?

When we refer to downtown Kenmore, we’re talking about approximately 9.6 acres of property at the northwest corner of 68th Avenue NE and NE 181st Street—property that, from 1999 to 2005, the City purchased and assembled for downtown development.

Then, from 2006 to 2012, the City went through one round of potential development that ended with the City and developer mutually deciding to part ways. This prompted the City to begin anew the process of strategically planning and taking action to turn these combined properties into a recognizable city center. And now we are seeing the results of all that purchasing and strategic planning—because downtown Kenmore is almost here!

Kenmore Camera is in place, daily drawing customers from all over the region. EvergreenHealth, the Spencer 68 and LINQ apartments, lofts and flats are bringing in new residents of dynamic backgrounds. New mixed-use commercial development is coming soon just south of the LINQ under the name of Flyway. Construction for our very own Town Square was completed in summer 2017.

Get a more detailed play-by-play of the downtown Kenmore story below.

To stay informed on the downtown Kenmore project, you can sign up to the City's email distribution list. Project updates will be posted on this web page.

What is the Town Square?

Connected to the Hangar by a large airplane hangar-style door that can remain open on warm summer days, the Town Square is an outdoor gathering space that features a “dock” to sit on and dangle feet in water fed by fountains interwoven with lights. Bike racks and a bike maintenance station providing air and tools for minor repairs, and a bike charging station for electric bicycles provide support for this modality. During cooler months the Town Square offers unique heated rocks—realistic giant rocks heated with radiant heat to provide a warm respite from chilly air. Backyard-style seating areas in casual groupings provide an additional option for lingering. Complete with a doggie station and bag dispenser to accommodate those with leashed dogs, and other surprises waiting to be discovered, the Town Square offers 12,750 square feet of companion space to the Hangar, a perfect setting for community interaction.

What is the Hangar?

Designed to accommodate community gatherings and shared use, the Hangar features a double-sided fireplace and eclectic array of comfortable furniture creating a warm and intimate space to read, converse, work on homework or simply hang out. This 1,985-square-foot common area “Otter” has free Wi-Fi, a variety of outlets including phone and computer charging stations, a projector and screen and a robust audio-visual system, all contributing to a contemporary, technology-enabled space. Adjacent to the main space is a 208-square-foot multi-purpose room “Beaver” with glass sliding doors set in the open position when the room is not in use. This public space contains a flat-screen television and is available for reservations.

Co-located within the Hangar is retail tenant Diva Espresso, a northwest original coffee franchise that roasts its own beans at its warehouse in north Seattle. Diva Espresso will sell various beverage and food options, including coffee drinks, teas, smoothies, baked goods, sandwiches, ice cream, and beer and wine for on-premises consumption. The Hangar allows visitors to take advantage of the offerings of Diva Espresso or just hang out in a community “living room” that is free and accessible to all. 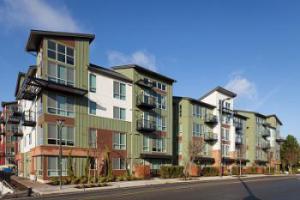 The second phase of development has been completed and includes 84 high-quality residential units, ranging from studio to three bedrooms; 104 parking stalls with a combination of structures and surface; and street frontage improvements on NE 182nd Street. 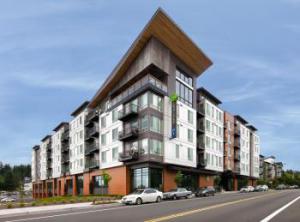 LINQ Lofts + Flats was completed and opened to the public in February of 2017 and features 94 modern residential flats and lofts, along with approximately 20,000 square feet of commercial space leased to Kirkland-based Evergreen Health. The five-story development is comprised of four-stories of residential units above approximately 20,000 square feet of commercial space and one level of under-building parking. The project also incorporates many sustainable features while pursuing LEED Gold status.

For details on the LINQ building visit www.liveatthelinq.com.