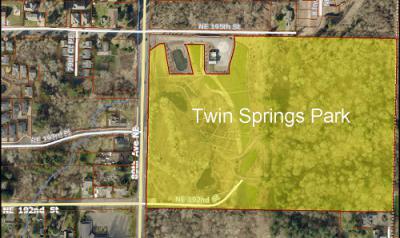 The City hosted an open house regarding Twin Springs Park in September 2017 to gather input from the community for what the City can do on an "interim" basis (by summer 2021) so the neighborhood park can be open for public enjoyment. Feedback was also gathered through an online survey.

The City hosted another open house in October 2017 to present concepts reflecting the input gathered in September. The public was invited to provide feedback on these concepts.

In 2004 King County began construction of the Brightwater Regional Wastewater Treatment Project, construction was completed in 2015.  The County acquired five primary portal sites including the North Kenmore Portal Site in 2006.  In October 2005 the City executed a Memorandum of Agreement (Contract 05-C459) regarding mitigation for the Brightwater Project.  This agreement also noted that after the construction of the Brightwater Portal project, surplus property not needed for the portal project would be transferred to the City.  At several meetings in 2006 and 2007, the Council discussed the Brightwater property transfer prior to entering into an interlocal agreement (Contract 07-C606) regarding terms of property transfer.  In 2007 a site assessment was completed by the Berger Partnership which was updated in 2008.

The 25- acre Twin Springs Park site was acquired by the City of Kenmore in 2016 from King County to be used for a public park and open space site. The park is located on the east side of 80th Ave NE between NE 192nd St and NE 195th St. Twin Springs Park is recognized as an ecologically rich site with wetlands, steep slopes, and existing forest. Based on these site characteristics and associated regulations, an early 2008 report anticipated that the park would serve as a neighborhood park, predominately remaining in an undeveloped natural state but with a narrow band of land that could be developed between the wetlands and forested hillside. This narrow band is intended to remain as a naturalistic park with limited built features to best allow for public engagement with the environment. As a neighborhood park, the site’s intended use is daylight hours from dawn to dusk. While the long-term vision for a neighborhood park includes trail improvements, we are excited to make near-term improvements (by summer 2021) that will allow us to open the park site to the public. It is intended that in the near future the focus will be on low-impact activities and build support for long-term improvements to the park once additional funding is secured.

Feedback from the September 12th, Open House on On-Line Survey

Approximately 20 people attended the Open House. We received some great feedback, comments, and ideas for what the City could do on an "interim" basis (1-5 years) and ideas for long-term improvements. Here's a link summarizing the feedback and also a link to the presentation. Over 80 people also responded to the online survey, here's a link to the results.

Approximately 25 people attended our 2nd Open House on October 24th. We reviewed the feedback, comments and ideas given at the 1st Open House for what the City could do on an "interim" basis, as well as for long-term improvements. To view the presentation, click here.